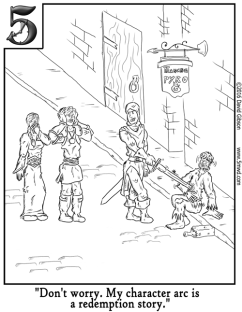 Click the image for the source: the 5 Minute Workday.  Awesome site!

M.L.S. Weech recently wrote a post talking about how he had to change a couple character arcs in his upcoming novel Caught.  It got me to thinking, maybe I should touch on character arcs.  After all, the first time I heard of character arcs I didn’t have a clue what it meant.  I nodded my empty head, acted like I was checking my phone messages, and quickly did a Google search.  A few years later I have a better grasp of the concept.  So here’s a basic intro for you all to sink your teeth into.

When people talk about character arcs it’s really just a fancy way of saying, “a characters journey.”  Each character in your work should undergo changes (ideally) through the duration of the story.  A character arc is a way for you to track those changes.

(Beware!  Lord of the Rings and Hobbit references incoming…)

Being a Tolkien fanboy, I think of Bilbo Baggins.  He is plucked from his cushy hobbit hole, thrust into a great adventure, goes through many changes, resolves the conflict, and returns home a different hairy-footed hobbit.  He has a very dynamic arc.

While his arc is interesting and enjoyable, think of all the other characters from the book series.  Frodo, Gandalf, Samwise, Aragorn, and the list goes on.  If you pluck each one of these characters out of the book, chart their progressions individually, you will see major shifts in their arcs.  Arguably, it’s one reason why The Hobbit, which was written in 1937, is still relevant today.

The point of character arcs is to prevent your character from being flat.  By this we mean the character changes very little throughout the story.  If the reader senses no emotional changes or growth in your characters they will be left feeling hollow.

If the concept of character arcs is completely foreign to you, here are a couple resources to check out.

How to Write Character Arcs, is an article by K.M. Weiland.  She does an outstanding job of explaining the concept and even digs a little deeper by offering examples of positive change arcs, negative change arcs, and flat arcs.  If you like the article, she has written a few books on the subject as well.  The two I would recommend (in regards to this specifically) are Crafting Unforgettable Characters and Structuring Your Novel.

Veronica Sicoe, is an author and blogger.  She wrote an article called, The 3 Types of Character Arc – Change, Growth and Fall.  Not only is her article really solid and spot on, it’s a hilarious read (seriously, her writing style is glorious).  She offers insight into what character arcs are and offers three types: change arc, growth arc, and fall arc.

I‘m not going to try to re-explain what these two have already done perfectly.  What I will offer is how I track arcs when I self-edit, and when I edit for clients/friends.

As I read/write I jot down characters as they appear in the story on a piece of paper.  At the conclusion of the chapter I write whatever it was they did.  Sometimes the character does nothing.  Sometimes they punch a hole in someones chest, and in doing so, learn a greater lesson about life and love.  I keep a separate piece of paper for each character.

Here is an example of what I use.  Feel free to use it yourself.  Image is linked to my Flickr.

As the book progresses I continue to add events onto the character pages.  Once the book is completed I look at the character sheets individually.  This is when I can really see the change in the characters.  Does hero #1 simply crush everything in his path?  Does he/she ever really get challenged?  Sure it can be cool to have a hero that is a demi-god and smites every obstacle foolish enough to present itself, but in the way of emotional content this can be a fail.

Looking at it on paper lets me cut through the pages of extra information and focus specifically on the character minus all the other frills.  As writers we tend to get lost in the story and can lose track of what all our characters are doing (or how they are growing).  It’s also effective because so many writers focus mainly on the protagonist and antagonist.

In the Lord of the Rings series, Samwise Gamgee could have just been a guy who took some punches, carried gear, and groomed his hairy feet.  But no, instead he touched our quivering hearts by saying stuff like, “Come, Mr. Frodo! I can’t carry it for you, but I can carry you.”  What a moment.

Sam wasn’t just carrying Frodo, he was helping to carry the story.  For moments like this to happen in your own writing, each character needs to grow and change.  Character arcs can help make that happen by forcing you to consider the work each one of your characters are doing to elevate the story.

That’s it for today.  Don’t forget, if you are the keeper of character arc lore and know the origins, please share.  Do you have a method of utilizing character arcs?  Do you make doodles or outlines?  I’d love to hear about your processes.  Here is a template I use myself. Until tomorrow, keep reading, keep writing, and as always – stay sharp!

Visits From A Man Named Nobody 46

The Return of The Great Game!