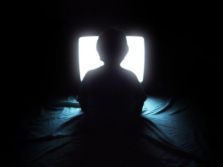 Welcome to a weekend in the QE household.  It’s blistering hot outside (100 Fahrenheit) and with our baby boy not being impervious to the heat, we are trapped in the house.  Given our confinement, my wife and I have spent some time watching what I classify as, “terribly cheesy television shows.”  Truth be told, I have found myself guiltily enjoying them too.

These cheesy shows range in content, but they all feature “important” and distinct kinds of conflict.  The use of conflict is what causes the viewer to give a hoot about what is happening to those characters.  What is interesting to me, is each of these types of conflict revolve around a kind of death. 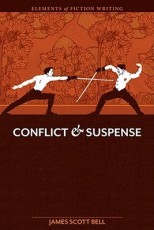 This bring me to James Scott Bell, an author who has written a number of very useful books on the craft of writing.  In his book, Conflict & Suspense, he implanted an idea in my head I can’t seem to shake (and that’s a good thing).  His premise is that, “There are three kinds of death: physical, professional, psychological” (p. 10).

It’s a basic concept, but one worth talking about.  Let’s take a day to break these three down.

Physical Death.  Call a florist and make arrangements because this is the grim reaper poking you with a bony finger.  In books and television the threat of a beloved character dying keeps us invested.  In many ways, this is the ultimate fodder for conflict.  Nothing could have higher stakes than being turned into worm food.

I would argue this is the most relatable kind of death.  Your opinion may vary depending on what has happened in your life.  With my military and police background, fear of death is something I was keenly aware of on a daily basis.  Despite living a cushy stay-at-home dad life now, that fear is something that has been hardwired into my brain.

Professional Death. I think many aspiring writers (myself included) deal with this conflict from time to time.  The professional death is a conflict that could destroy a career or calling.  In stories, this is where the occupation of a character is being threatened by external/internal forces.

This is the doctor facing a malpractice suit, the lawyer being disbarred, or the bank coming to close the family business.  For writers, this is the pile of rejection slips or email from an agent saying, “You need to work on your writing mechanics.”

Psychological Death.  “Like, Becky, you don’t even know.  If Jimmy takes Suzy to the prom…I will die!”  This type of death seems irrelevant in the grand scheme of things, but to the character, it’s earth shattering.  Many comedy and romance based television shows thrive on this.  Many books function much the same. 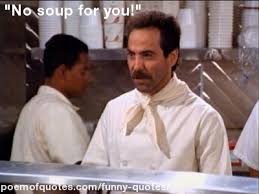 I laughed as I read about Bell’s description of this, because as he explained the concept, I thought of the television show Seinfeld.  Wouldn’t you know it, he went on to talk about the same show.  Bell explains, “…take any episode of Seinfeld.  It’s always about how important something stupid is to the characters.  Like the soup in ‘The Soup Nazi’ episode.  Oh, the soup!  If Jerry doesn’t get this soup, he will die inside.  In fact, there comes a moment when Jerry must choose between his girlfriend, who has offended the soup Nazi, and the bowl of soup” (p. 12).

Blending the concepts.  In my opinion, a good book or story can use one of these concepts, or merge them together.  Regardless of what method the writer uses, they need to make the reader care.

I think we all have read a story or watched a show where the drama was so contrived we are left dizzy from the amount of eye-rolling it produces.  This is usually a failure in character or in buildup.  In the rush to get the conflict pot boiling, writers can forget how important it is the reader cares about your character.

If the reader is indifferent to your character, that spells death for the character and for the book.  One way to help the reader care, is make sure the potential death would impact more than the fallen character.  I will do a post on subplots one of these days, but this is basically what we are talking about.  Here are some basic, and cheesy, examples.

That’s it for today.  While this is a basic concept, I like it because it keeps my mind focused on the craft of storytelling.  Even if I’m two hours into a Netflix or die binge fest, I’m still analyzing storytelling concepts and thinking about how to apply them in my own work (at least that’s a justification for the time squandered).

What types of death threaten your characters?  Do you find one type of death more sinister than the others?  I’d love to hear about it.  Until tomorrow, keep reading, keep writing, and as always – stay sharp!

Visits From A Man Named Nobody 86

A Blessing In Disguise? An Update on the Hazel Marketing Issue

Visits From A Man Named Nobody 85

Another Marketing Blow From Amazon