I recently had a friend contact me because an editor had given them feedback that mentioned, ‘the curse of knowledge’.  My friend mentioned it for two reasons: they weren’t entirely tracking on what it meant, and they knew I blog about writing and thought I could mention it in a post.

There’s a touch of irony in having an editor tell you to avoid the curse of knowledge.  It becomes even more ironic when they don’t explain exactly what it means.  I’ve seen a few explanations of the term, but to put it plainly, it’s when a writer makes assumptions about what their readers know and end up writing above their heads.

Here’s a non-fiction example.  When I was a journalist in the Navy, we were instructed to break down our writing to the grade school level.  This tailored our writing to a wider audience and made it more accessible to the average reader. 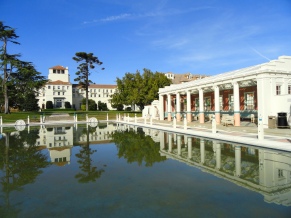 The Naval Postgraduate School wasn’t a terrible place to be stationed.

Then, later in my Navy career, I got stationed at the Naval Postgraduate School in Monterey, California. The students at the school were senior officers from all branches of the military and from allied countries.  The focus was mostly on advanced science and technology projects.  I was told to step up the complexity of my writing because now the average audience was perceived to be more intelligent.

I remember being assigned a story about a professor and some students who were developing free electron laser technology to be used on ships.  The idea was to use directed energy to blast incoming rockets and projectiles out of the sky before they would reach a ship. The professor’s name was Bill Coulson, and I was super excited to talk about something that hearkened images of the planet Alderaan being destroyed.

When I sat down with Bill, I asked him to describe the scope of the project.  The explanation was interesting, but very confusing.  There were lots of technical terms and science jargon.  After he finished, I asked in the nicest way possible if he could explain some aspects of it again, but dumb it down for me. He obliged.

At this point in time I didn’t know a lick about ‘the curse of knowledge,’ but in retrospect, this example really illustrates it well.  Bill, due to his technical experience and level of knowledge, glossed over some facts that would be essential to my story.  By glossing over, I do mean, used scientific jargon very few people truly understand.  I needed a way to write those bits of information in a way for the average reader to comprehend.  For me to do that, I needed to understand it myself.

This is an important concept to think of when you are writing.  I find that many times people who use lots of technical terms and jargon do so for two reasons: sometimes they don’t really understand what they are talking about themselves, and sometimes they are afraid to be seen as simpletons by peers.

Now, about that first conclusion.  When I ask someone to break something complex down and they can’t, I often wonder if they actually know what it is they are talking about.  In the example I offered, Bill had no trouble simplifying some very advanced engineering and physics concepts to their bare bones.  He truly understood the content; I just needed to filter and understand it myself.

In regards to being afraid to look like a simpleton, that’s something we just need to be able to get over unless we want to only appeal to the most pretentious readers (and those blow-hards are probably going to criticize your work no matter what).  When I interviewed Bill, I could have just nodded my head and dumped all of the content he gave me into the story in its raw state.  But that would have been a disservice to him because a story of this nature helps spread the word.  If no one understands the science, then it’s harder for him to get grants to pay for all of his cool toys.

I‘m not saying my story helped change the world, but these lasers are on ships now…

[Side Note:  If you are still reading and are thinking, QE tell me how to build my own laser weapon, here is a cool pdf Bill put together that talks about the evolution of the tech. Good luck…]

The curse of knowledge also manifests in a lack of detail.  Some writers make the assumption, because they are so close to the story, that everyone may know what it is they are describing.  Because of this, they strip the setting of detail and only offer a skeleton.  Steven Pinker, author of The Sense of Style, states that, “Many experiments have shown that readers understand and remember material far better when it is expressed in concrete language that allows them to form visual images…” (p. 72).

We want people to remember our story.  It’s often why it’s recommended to anchor the reader in setting early in chapters.  When people recall a story, they often recall it in chunks (our brain chunks information to help us remember it).  For them to remember a specific chunk/chapter, it’s vital for the storyteller to anchor them in each chapter and paint a brief picture.

Whether you are bamboozling people with complex language, or stripping things down, the best way to cure the curse is to step outside of your own perception.  Put another way, it’s a fools errand to solely apply your own judgement as to what other people understand.  If you want to know what people think, you need to ask them.  This is why it’s of vital importance to pay special attention to your beta and alpha readers (your editor might be able to offer some insight too).

That’s the breakdown of the concept.  I may do one future post on this that discusses some of the misconceptions and beliefs behind the curse.  Let me know if this is something any of you are interested in.  Have any of you fallen victim to the curse?  Have you read the work of someone afflicted with it?  I’d love to hear about.  I’m also very open to more solutions.  Until tomorrow, keep reading, keep writing, and as always – stay sharp!