“Writing about dialogue is such a pain,” Corey said.  It was a futile thing to say as he was alone in his office.  Corey’s cat Niblet heard his lonely rambling and jumped up onto his desk to console him.

Corey’s eyes widened as Niblet brushed past his hands and went for the computer keyboard.  The furry fiend began smashing the buttons with her paws.  The following words stretched across the empty white blog expanse: “Human.  Why you sit and stare at this glowing window?  Fetch me treats human.  Then talk about the new book I saw you reading while squatting over the strange, water-filled litter box.”

The new book Niblet was referencing is, How to Write Dazzling Dialogue, by James Scott Bell.  Oddly, I don’t have a lot of books on the mechanics of dialogue.  At 135 pages this one is absolutely packed with information.  I do have a few books written by Bell, and he seems to deliver consistently.  I’ll likely give the book its own spotlight later, but today I wanted to share a tool I found in it’s pages.

When we talk in real life there is often an agenda behind our exchanges.  Sometimes the agenda is transparent.  Other times it’s hidden beneath layers.  Let’s play with a random example I’m about to pull out of my creative whirlpool.

“Hello.  What do you want?”
“A caramel frappe latte with extra whip, chocolate sprinkles, and four pumps of chocolate syrup!  If there are five pumps, I’ll send it back.”

We know from those couple lines of hastily written dialogue we have two people: a customer and a server of some type.  We can also make some basic assumptions from what is said by the two.  The server doesn’t seem very friendly, and the person ordering the coffee seems like a level 27 control freak. 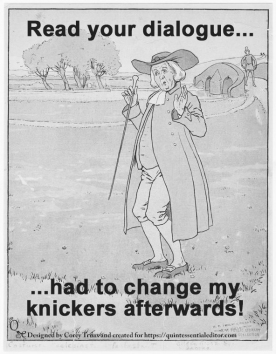 We can also make some assumptions about agenda here as well.  The servers agenda is likely related to getting this person in and out as quickly as possible.  The person ordering the drink has a different agenda: to get what they want how they want it.

Grab whatever book you are reading or writing and go to some dialogue.  Take a moment to familiarize yourself with the scene, and read a couple lines.  After you are done, ask  yourself this question: What are the speakers goals?  Put another way, what are their agendas?

Dialogue, if it is going to be effective, should be building the readers understanding of the character.  Yes the words are important, but how the reflect on the speaker is just as important.  On a side-note, your agenda and the characters agenda should not be the same.  If you look at a string of dialogue and say, “That’s there because I needed to explain who, what, where, or when this was happening,” you might want to reappraise.

Consider the following example Bell offers from his book, How to Write Dazzling Dialogue:

“I simply will not have it!” Robert Massingale expostulated.  “Not while I am the head of this family of five.  Goodness knows it is hard enough to run an estate during the reign of Her Majesty, Queen Victoria.  But having a servant from Hungary come into this house without the proper references, and with a scar across his left cheek to boot, which he no doubt got in a waterfront bar somewhere during his thirty years on this earth, I tell you, I simply will not have it” (p. 7).

Before you say, “That Bell doesn’t know anything about dialogue,” understand the above passage was a example he provided of what NOT to do.  It may seem obvious, but normal people don’t talk like this.  Those bizarre snippets of backstory tossed haphazardly into normal dialogue are jarring.  It’s easier to notice it in other peoples work.  If a character begins feeling more like a ventriloquist’s puppet, and less like a real person, this might be the issue.

Many times, while in the grips of creation, we begin smashing information into dialogue that shouldn’t be there.  Now don’t get me wrong, dialogue is an outstanding method of delivering information to your reader.  You just have to do it in a way that is believable, and also ties into their agenda.  It shouldn’t be dialogue for the sake of information dump.

Bell recommends to break down each scene, look at what characters are saying, and write down (or at least consider) what their agendas were.  What were they trying to accomplish with their words?

I like this tip.  I think it’s a pretty solid way of measuring the worth of dialogue.  My only addition point would be to consider that an agenda doesn’t have to be a giant thing.  An agenda can be as simple as getting under someones skin (annoying them).

That’s it for today.  Oddly enough, this is the first dialogue specific posting I have offered.  Do you have a method of evaluating dialogue?  Or do you simply give a it a read (hopefully aloud) and see how it feels?  Are there aspects of dialogue you are curious about and would like addressed in a future post?  Let me know!  I’d love to talk about it.  Until tomorrow, keep reading, keep writing, and as always – stay sharp!

Visits From A Man Named Nobody 86

A Blessing In Disguise? An Update on the Hazel Marketing Issue

Visits From A Man Named Nobody 85

Another Marketing Blow From Amazon